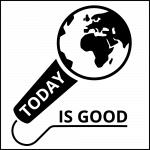 Today is Good! is a song and a project, the encounter between young asylum-seekers in Sicily and two European musicians who went to meet them. The name came from Obaydul Kader, who called out “Today is good!” in a group improvisation, and then explained: “We are singing!”

Starting in Summer 2017, we made weekly visits to Casa Freedom, a reception centre for unaccompanied minors near the town of Priolo Gargallo on the east coast between Catania and Siracusa. We usually began by singing and then playing music while wandering around the centre. As a regular group formed, the boys started presenting songs they had written themselves. It happened explosively sometimes, and an otherwise hidden world erupted in front of us, with dancing, rapping, singing and shouting in multiple languages – Bambara, English, French, Wolof… we felt invited into the lives of these young people, privileged to share the emotions and thoughts that they expressed.

We recorded and produced this selection of their songs at Casa Freedom and at our home in Siracusa, using the basic resources we had to hand – voices, guitars, saxophones. We hope it offers a sense of the creative strength this generation is bringing to Europe, and the wonderful potential for collaboration.